Located 124 km from Fortaleza, near Paracuru, Lagoinha Beach is certainly one of the postcards of Ceará. With a length of 15 km, its landscape is made up of a wide strip of fine sand, freshwater lagoons, coconut palms, and a breathtaking green sea.Those who visit Lagoinha have the certainty that it is the beach of their dreams, a cinema landscape punctuated by jangadas (colorful Brazilian rafts) and a very peaceful and happy people.The site once served as a refuge for French pirates, and legend says that in the dunes of Lagoa da Barra, treasures were buried, but no one has ever found anything. That said, with so much natural wealth, who needs treasures?At one end of Lagoinha is the most beautiful landscape of this beach, and perhaps of all of Ceará. Between two red dunes, bordered by palm trees, the beach forms a half-moon which ends in the offshore reefs.On the heights, the small fishing village has preserved its authenticity and its calm while adopting a certain modernity thanks to the proximity of Fortaleza. You will find all the amenities, a few bars, numerous restaurants, pousadas, mini-supermarkets, a pharmacy, an internet cafe … around a pretty central square where the locals meet in the evening.Apart from the kite, practiced at the beach in a sea always calm enough thanks to the shape of the bay, or in the lagoon (flat water, steady and sustained wind and lots of space guaranteed), you can visit by buggy or by quad beautiful landscapes (dunes, rivers, lagoons …) or surf the waves in short-board or kite strapless with the locals. 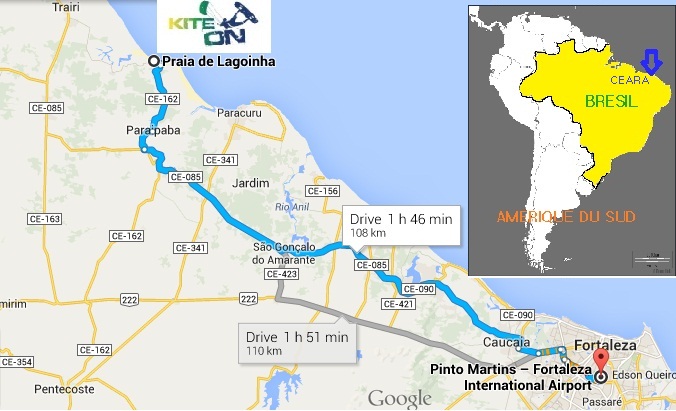 Bemvindos no Brasil!Brazil is in itself a continent in the vastness of South America. The exuberance of its nature is matched only by the variety of its magnificent landscapes, and it is on the east coast that you will find an infinity of kite spots, spread over almost 2000 km of beach, crossing the states of Rio Grande do Norte, Ceara, Piaui, and Maranhão.In this sunny and beautiful Brazil by nature, it is in Ceara that you will find the windiest spots, beautiful white sand beaches, wild, immense and pristine, for the pleasure of the eyes and the senses. Dunes, freshwater lagoons, large coconut palms, orange cliffs, air and water at the ideal temperature, the scenery is total and everything invites relaxation and well-being.Beyond the ideal conditions for kiting, you will succumb to the charms of Brazil while tasting a caïpirinha or a fresh fruit juice at sunset, eat grilled fish and freshly caught crustaceans in a warm atmosphere and appreciate the sympathy of its inhabitants!

The Ceara, and in particular Lagoinha, are swept by the trade winds, strong and particularly constant east wind from Africa, reinforced by thermal winds, blowing with an average of 20 to 28 knots a good part of the year (from July to January).The sailing conditions are excellent from morning until sunset and are suitable for both beginners and experienced.The wind is side-on on Lagoinha beach and you will find freeride conditions there; for the waves, you will go to the right of the bay, up to the beach of Porto Velho, and for the flat at the lagoon of Jegue. Unless you prefer to discover the surrounding spots during very beautiful downwind.

The best months to go:

Wind conditions (on average over the year)

The Windguru data are undervalued because ignoring the thermal wind, add 6-7 knots on these forecasts.

From July to January: A sustained and constant wind sweeps Lagoinha Bay, giving it excellent wind 7 months statistics, with an average of more than 27 days per month of wind higher or equal to 4 strength!
March-June: the rainy season. In February, the conditions are still good and that is the carnival, mid-February, just close the season.

Carnival: The carnival marks the end of the season, it’s a full week festival which hosts several thousand of people from the surrounding area;
Late July: Regata da Lagoinha: Ceara traditional event of the calendar, it’s a Jangadas race(traditional boats) over several days where the animation is in full swing;
October: Festa do Camurupim in Guajiru the neighboring village, in homage to the big fish “Camurupim” typical of the region, delicious fish to cook with large transparent white scales used to make jewelry and decorative items.
December 24 to January 3: Christmas holidays and New Year’s Day, celebrated on the beach and punctuated by a beautiful firework display of the orange dune and attract thousands of people from the area and the major cities of Brazil, dressed in white for the occasion.